I KNOW I just missed National S’mores Day by a hair, but I’m sure you can find it in your hearts to forgive me and try this recipe anyway. I’ve been wanting to play around with variations of french toast for a while, and adding s’mores to the classic breakfast was one of the first things I thought of. 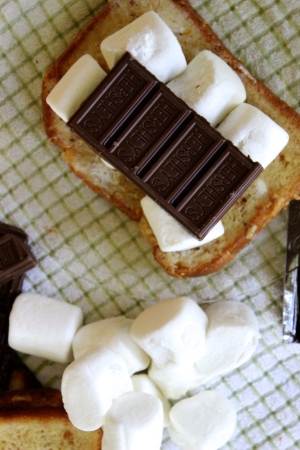 Growing up, I used to make s’mores at my aunt’s house in Connecticut. She doesn’t have a fire pit and bonfires definitely weren’t allowed in her suburb, so we always used the flames from her gas grill to toast our ‘shmallows. She bought these long roasting sticks at Christmas Tree Shop (one of her favorite stores, and one that I enjoy as well). I think we reused the same ones for a couple of summers in a row -not sure if that’s hygienic but oh well, we were kids. Being the sentimental person that I am, I wrote the dates that we used them in sharpie on mine. If I looked really hard, I’m sure I could find one tucked away under my bed, shrouded in dust bunnies and other childhood memorabilia. 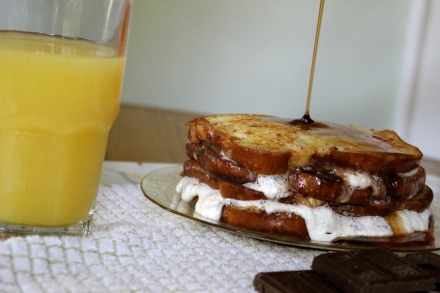 I also have a delightful memory of s’mores-making shenanigans from my semester living in LA: In the last week that we were there, one of my wonderful classmates Orrin had all of his fellow Business of Acting students over to his scenic house in Malibu. His parents made us handmade pizzas, grilled chicken and veggies for dinner. As the night wore on and the ocean breeze became chillier and more persistent, they built a fire and we made s’mores sitting around it under the twinkling white lights strung around the yard.

S’mores encompass summer, companionship, and community. French toast is a delicious treat that my mom makes for me once in a while (although this recipe is not the one that she uses). So, why not marry the two into one delicious, ooey, gooey, delightful mess that is sure to rot my teeth out of my head? 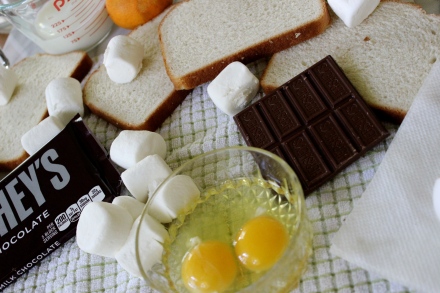 A couple of pinches of brown sugar 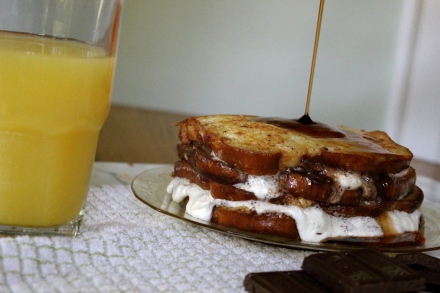 Combine the eggs, milk, nutmeg, cinnamon, vanilla, and orange zest in a shallow bowl or pie pan. Whisk until combined and the spices aren’t lumpy and are evenly distributed. Heat 2 tbsp of the butter over medium heat in a medium frying pan. As the butter melts, start soaking the bread, one piece at a time, in the egg mixture. Make sure you flip each piece so that they’re evenly coated and won’t stick to the pan. Once the butter is fully melted, add a piece of bread to the pan. It should sizzle. If it doesn’t, turn up the heat a tiny bit. Once the first side is golden and no longer soaking wet, flip it. Continue with the rest of the bread, putting them on a plate as you finish each one. Set aside. 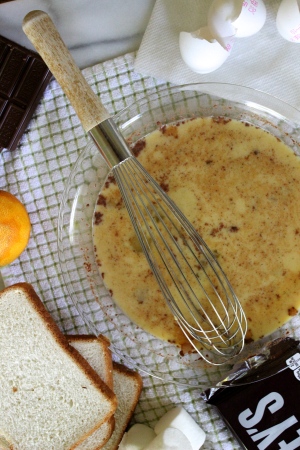 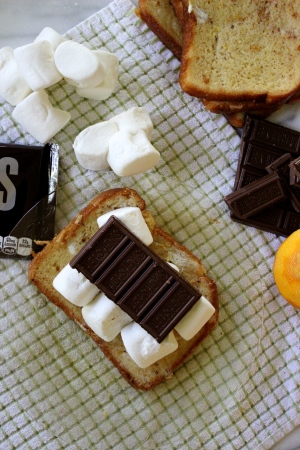 Once the bread has cooled ever so slightly, place half of the chocolate and half of the marshmallows on one slice of bread. Top with another slice, and add a pinch of brown sugar to the top. Repeat with remaining two slices. 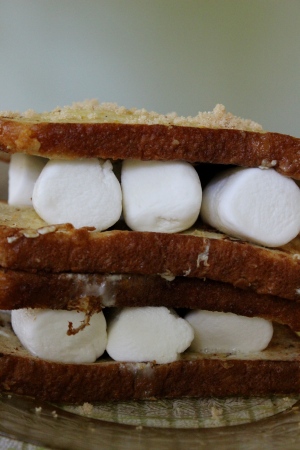 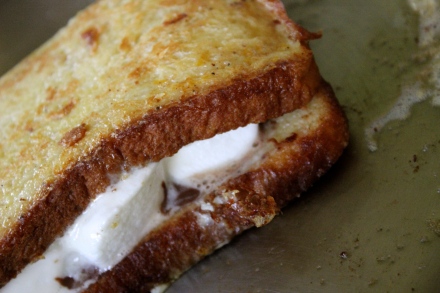 Add the remaining butter to the pan. Once it’s melted, add one of the sandwiches, brown sugar side up, to the pan. If you can fit both sandwiches at once, feel free to do so. Once the bottom seems firm but not dried out, flip them very carefully, so that the brown sugar side is facing down. Again, once the bottom feels firm but isn’t dry, per say, remove the sandwiches from the pan. The marshmallows and chocolate will keep cooking for a few minutes after they’re taken off the heat, so don’t worry if they aren’t completely melted at this stage. Drizzle the sammies with maple syrup if desired, and serve immediately. 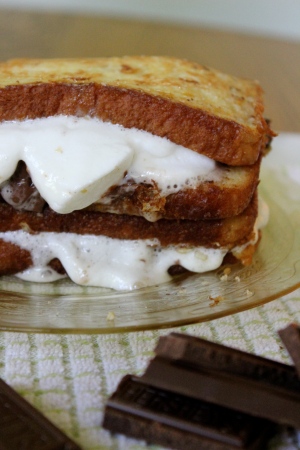 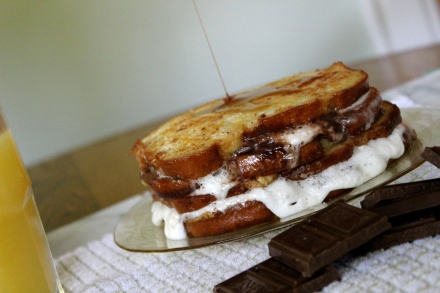