Julia Child. What a woman. People are often put off by her recipes because they’re complex and time consuming. But, when I follow her instructions to a T, I know that whatever I’m making will turn out fabulously- and that can’t be said of many cookbook authors. Also, the Parisian life she shared with her husband Paul is decadent in and of itself. When I’m standing over a chilled metal bowl whisking ferociously, I sense that I’m partaking in some small piece of that romantic, chocolate laden experience.

I’ve made a few chocolate mousses before, and none hold a candle to Julia’s (Mrs. Child’s? I feel like she wouldn’t have let me call her by her first name). Some have turned out too airy; I don’t think chocolate mousse should be the same consistency as my Paul Mitchell hair volumizing mousse. Mousses that are too airy also tend to be too sweet and not very chocolatey. WHO WANTS THAT BS?! Not I.

I’m always a little hesitant to make recipes that feature raw eggs, but true chocolate mousse really can’t be made without this addition. Since I made this batch for a tea party, I let the guests know before serving the mousse so that they could decide for themselves if they wanted to be daredevils and eat it, or play it safe and miss out on a helluva good chocolate experience.

Heat a saucepan one-third full with hot water, and in a bowl set on top, melt together the chocolate, butter and coffee, stirring over the barely simmering water, until smooth. Remove from heat.

Fill a large bowl with ice water and set aside.

In a bowl large enough to nest securely on the saucepan of simmering water, whisk the yolks of the eggs with the 2/3 cup of sugar, rum, and water for about 3 minutes until the mixture is thick, like runny mayonnaise. (You can also use a handheld electric mixer.)

Remove from heat and place the bowl of whipped egg yolks within the bowl of ice water and beat until cool and thick, as shown in the photo above. Then fold the chocolate mixture into the egg yolks.

Fold one-third of the beaten egg whites into the chocolate mixture, then fold in the remainder of the whites just until incorporated, but don’t overdo it or the mousse will lose volume.

Transfer the mousse to a serving bowl or divide into serving dishes, and refrigerate for at least 4 hours, until firm. Cover with plastic wrap so that a skin doesn’t form.

The mousse can last in the refrigerator for up to 4 days. Garnish with mint, or a caramel shard before serving. 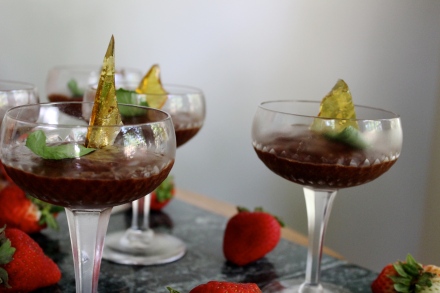