Kahlua Coffee Chocolate Cake: it’s a mouthful to say and to eat. Sometimes I bake for a specific reason, like a special occasion or a family gathering, but there are also times when I just bake for the sake of trying a new, enticing recipe. I’ve had my eye on this recipe, which I found on the beautiful bakersroyale.com, for a while now. And by a while, I mean 3 or 4 days, but those few days felt like a month. How could you see this cake and not want to  eat it immediately?

As fabulous as the recipe looked, I didn’t want to make an entire two layer cake for fear of eating an entire two layer cake by myself. So, I halved the cake recipe. I kept the buttercream recipe the same since I’m a fan of heavy frosting. I did have some leftover, but I never have a problem with surplus frosting. Since most of you would probably rather have a two layer cake to show for your labor, I have kept the cake proportions as they were in the original recipe. However, I did leave out the hazelnuts for allergy purposes.

Once I finished making the cake (and ate two slices), I actually brought it to my best friend’s house for her family to enjoy (especially Uncle Tony!). It also happened to be our 10th Friendiversary… yes, we celebrate the day that we became friends.

Preheat oven to 350 degrees and spray the bottom of 2 8-inch cake rounds with baking spray.

In a heat-proof bowl, microwave the chocolate on high power in 20-second intervals until melted; stir between intervals. Let cool slightly.

Whisk together flour, cocoa powder, baking powder and baking soda in a bowl; set aside. In another bowl, whisk together buttermilk, coffee, Kahlúa and vanilla; set aside.

In a stand mixer fitted with the paddle attachment, beat the butter, sugar and salt at medium speed until light and fluffy, about 2 minutes. Beat in eggs, one at time until fully incorporated. Turn mixer speed down to low, in 3 alternating batches beat in the dry ingredients and the wet mixture, scraping down the side down the bowl as needed. Fold in chocolate.

Pour batter into prepared pans and bake for 40 minutes, or until wooden skewer inserted in the center comes out free of wet batter.  Let the cake cool in pan for 20 minutes. Remove and transfer cake to a wire rack. Using a wooden skewer or a long tine fork, poke holes in the cakes and brush Kahlua all over cakes. 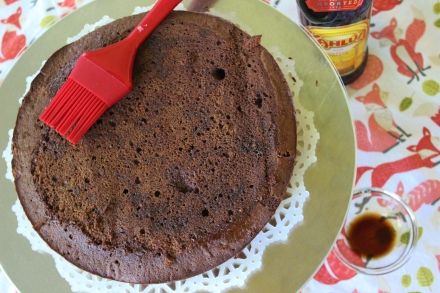 In a heat-proof bowl, microwave the chocolate on high power in 20-second intervals until melted; stir between intervals. Let cool slightly. Cooling the chocolate is imperative; if it is too hot, it will separate from the butter when you mix it.

Transfer chocolate to a stand mixer fitted with the whisk attachment and on medium speed beat in Kahlúa and heavy cream. Beat in confectioner’s sugar.

Turn mixer speed to high and add butter in two tablespoons at a time and beat until the frosting is thick and creamy. 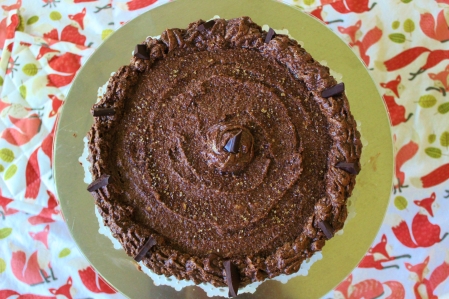 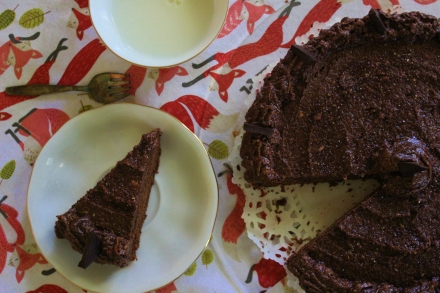 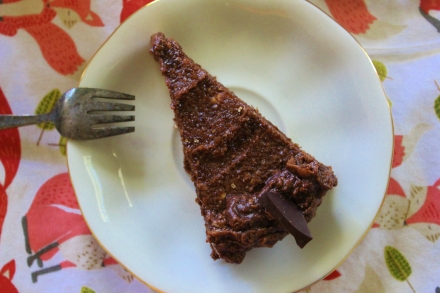