I met one of my best friends when I randomly moved into her apartment two years ago. Her birthday was only a few weeks after I had moved in, and I had no idea what to get her as a gift since I hardly knew her.  I felt that it would be awkward to spend a lot of money on the gift (again, we had just met). Then it hit me: when in doubt, bake. Baking allows you to show how much you care by putting a lot of time, rather than money, into a present. I made her these cappuccino cupcakes, which went over VERY well; like I said she’s now one of my best friends.

The recipe for the frosting comes from The Sweet Little Book of Cupcakes, which is written by the good people of Sweet Cupcakes in Boston, and is my go-to when I need a one of a kind frosting flavor. I chose to use a chocolate box mix for the cake part; the cake recipes in this book, though flavorful and unique, are a lot denser than I like my cupcakes to be. I prefer a lighter, airier, texture.

1 cup, plus 2 tbsp room temperature cream cheese (I suggest taking it out of the refrigerator at least 30 minutes before you start working)

*Please note that this frosting recipe makes more than enough frosting for 24 cupcakes when frosted generously.

Beat the cream cheese and butter until creamy. If you are using an electric mixer, use it on medium speed.

In another bowl, sift the confectioners sugar and cinnamon together.

Add the confections sugar and cinnamon mixture into the cream cheese mixture one cup at a time while beating on low speed.

Add the vanilla and coffee extracts. 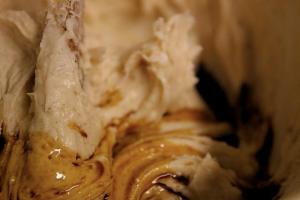 Keep the mixer on low speed for a few minutes, then switch it to medium speed until the frosting reaches its desired consistency. If you are mixing by hand, as I did, simply alter the speed at which you’re mixing.

Insert frosting into a piping bag, and pipe onto cooled cupcakes one at a time. Sprinkle round rainbow sprinkles on top. Be wary of putting on too many sprinkles, as this type is crunchy. 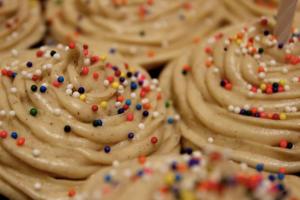